Débora Souza Silva is a Black Afro-Brazilian journalist and filmmaker. Her work has been featured on PBS, BBC, and elsewhere, and she is the recipient of the Les Payne Founder's Award from the National Association of Black Journalists, the 2021 Creative Capital Award, and a New York Times Institute fellowship. Her work examines systemic racism and inequality.

Don't miss this online discussion of her feature-length film Black Mothers Love and Resist. It examines the Mothers of the Movement, a growing national network of Black mothers whose children have been attacked by police. The film follows two mothers—Angela Williams and Wanda Johnson—and the cycle of courage and care that Black mothers have cultivated to protect themselves and their families.

Also joining us will be Wanda Johnson, a mother, activist and speaker, with a long history of community organizing and speaking to equity. When her son Oscar Grant III was killed by an Oakland BART transit officer on January 1, 2009, she embarked on a journey to turn that pain into purpose. Since then, Wanda has become an amplified voice for mothers and organizers. Wanda is also CEO of the Oscar Grant Foundation and licensed and ordained as a minister.

Note: This program is an interview about the film and its subjects; it is not a film screening. 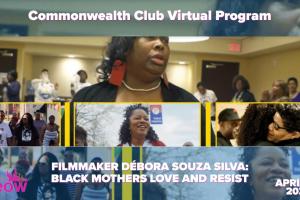