This first program in the series will address the future of trans health care, current advancements in care and accessibility, and best practices in serving trans and nonbinary community members today and in the future. This launch event will also include a reception following the program.

Future programs will cover a wide range of issues facing trans health care, including the ongoing attacks on trans children and families, policy advancements, mental health and wellness, and more.

Doctor Alexis Petra, M.D. is the founder and CEO of TransClinique. Petra was a practicing emergency medicine physician for over ten years prior to founding TransClinique. In 2019, she was named one of Phoenix magazine’s Top Doctors in the Valley. Dr. Petra is board-certified in emergency medicine and licensed in more than 30 states. She is a member in good standing with WPATH. Petra has been personally and professionally involved in the transgender and non-binary community for more than 20 years. Alexis founded TransClinique in April 2020 to give back to and create a safe space for members of the community to receive care. She provides hormone replacement therapy (HRT), letters of referral, and trans life coaching across the country through telemedicine. As a trans woman herself, Alexis understands the unique needs that members of this community have and knows firsthand both the hardships and rewards of the journey. Learn more at https://transclinique.com

Dr. Ellie Zara Ley, M.D., is a plastic surgeon at the Gender Confirmation Center. She is an accomplished board-certified plastic surgeon who had more than 15 years of specialized training in plastic, craniofacial and micro surgery before learning the art of gender confirmation surgery. She worked at New York Medical College in Valhalla, NY and in the general surgery program at the University of Arizona. Fellowship training followed: pediatric craniofacial plastic surgery at Primary Children’s Medical Center in Salt Lake City; hand and microsurgery at the University of Southern California in Los Angeles; and plastic and reconstructive surgery at the University of Utah, Salt Lake City. Dr. Ley became an assistant clinical instructor at the University of Utah and was concurrently developing a professional interest in gender surgery, researching techniques used by surgeons in Thailand. She returned to Arizona to open the Ley Institute of Plastic & Hand Surgery and the Arizona Craniofacial & Pediatric Plastic Surgery.

Dr. Christi Butler, M.D., is an assistant professor and urologic surgeon at the University of California San Francisco. She received her undergraduate training at Harvard University, where she concentrated in human evolutionary biology. She graduated from the Warren Alpert Medical School at Brown University in 2014 and subsequently completed her residency in urologic surgery at the UCSF. In 2019 she received a certificate in Patient Advocacy from the University of California Los Angeles, before going on to complete a fellowship in gender-affirming surgery and urologic reconstruction at Oregon Health and Science University under Drs. Daniel Dugi and Geolani Dy in 2020.

Heidi Wittenberg, M.D. obtained her Bachelors in genetics at the University of California, Berkeley, a Masters degree in applied physiology and an M.D. from the Chicago Medical School. Her residency was at Johns Hopkins in Baltimore, Maryland. In 1999, Dr. Wittenberg moved to San Francisco, continued to pursue urogynecologic advances and developed the pelvic medicine centers at California Pacific Medical Center, Pacific Gynecology & Obstetrics Medical Group, and Urogynecology Center of San Francisco. 2013, she was in the vanguard of first board certified specialists in Female Pelvic Medicine and Reconstructive Surgery specialists. Continued specialization in minimally invasive gynecology and robotics procedures certified her as a Master Surgeon of Excellence in Minimally Invasive Gynecology & Robotics by the Surgical Review Corporation. Dr. Wittenberg was recruited to train and perform gender affirmation surgeries such as vaginoplasties and metoidioplasties in order to help the transgender community. 2018, Dr. Wittenberg became director of MoZaic Care, solely focused on gender affirming surgery. Saint Francis Memorial Hospital named her medical director of the Gender Institute in 2020 and chief of surgery in 2021. Surgical Review Corporation certified her a Master Surgeon of Excellence in Gender Affirmation Surgery. Dr. Wittenberg traveled on surgical missions to Guatemala and surgical missions in San Francisco for the underserved. For this work she received the Congressional Operations Access Unsung Hero Award in 2011 and another Congressional Award 2018 for giving back to the community.

We are proud to partner with TransClinique on this special event series. TransClinique is the first national trans-owned and operated gender-affirming tele-health clinic. Lean more at https://transclinique.com/ 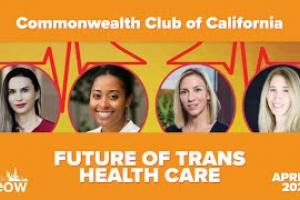