Dave Iverson was a 59-year-old KQED broadcast journalist and filmmaker when he decided to do something he’d never imagined. He moved back into his childhood home when his 95-year-old mom could no longer care for herself. Dave’s new memoir Winter Stars: An Elderly Mother, An Aging Son and Life’s Final Journey is the story of their 10-year caregiving journey, lasting until his mother’s passing at the age of 105. It’s a book Michael J. Fox calls “A gift—a modern classic of frontier literature documenting the uncertain journey into the country of caregiving.”

In this special Commonwealth Club presentation, KQED’s Scott Shafer will interview Dave about his new book and our growing eldercare crisis. Someone turns 65 every eight seconds in this country, and the pandemic’s ongoing toll on nursing home residents has prompted more people to consider caring for an aging parent at home. Yet what lies ahead when someone makes that choice?

Join Scott Shafer and Dave Iverson for an intimate, unvarnished conversation about the challenges, choices and unexpected rewards of caring for someone during life’s final journey.

Our moderator will be award-winning journalist Scott Shafer. Shafer is senior editor of the California Politics and Government Desk at KQED, where he leads the politics team’s coverage of the state. He is also co-host of the weekly radio program and podcast series "Political Breakdown." Shafer has covered stories for National Public Radio programs, including "All Things Considered," "Morning Edition," "Weekend Edition Saturday" and "Weekend Edition Sunday." He collaborated on and hosted "The Political Mind of Jerry Brown," an eight-part series about the life and political career of the former California governor. He previously hosted "The California Report." 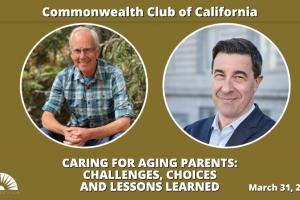