A Conversation with Chairman of the National Governors Association Asa Hutchinson

The Commonwealth Club is pleased to welcome Asa Hutchinson, Republican governor of the state of Arkansas, and the current chair of the National Governors Association (NGA).

Governor Hutchinson will discuss the critical role he has played in workforce training, infrastructure and new economy jobs not only in his state, but also across the country, leading the bipartisan National Governors Association. The NGA works alongside governors in their efforts to restore public health and continue a robust, sustainable economic recovery. When he became chairman of the NGA last year, Hutchinson pledged “to build on the areas where Republicans and Democrats agree and work to remove the obstacles in Washington where we can.” As chairman, Hutchinson has focused on K–12 computer science education, promoting his state’s best practices, in addition to engaging other governors on their strategies for success, to help increase computer science literacy needed for the jobs of the future.

A dedicated public servant, Governor Hutchinson was appointed by President Ronald Reagan as U.S. attorney for the Western District of Arkansas. In 1996, he won the first of three successive terms in the U.S. House of Representatives. During his third term in Congress, President George W. Bush appointed him director of the Drug Enforcement Administration and later as an undersecretary in the newly created Department of Homeland Security.

His experience has established him as a national resource for his expertise on trade, energy, national security, and education. The governor has been invited to the White House several times to join discussions about health care, Medicaid and education issues.

The governor is the former co-chair of the Council of Governors and the former chairman of the Interstate Oil and Gas Compact Commission, Southern States Energy Board, and the Southern Regional Education Board. 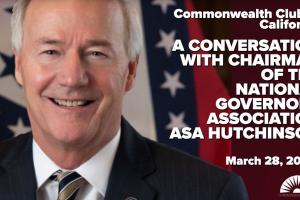 A Conversation with Chairman of the National Governors Association