Alan Dershowitz on the Human Rights Tragedy in Ukraine

The Ukrainian people are paying a high price for the massive and costly resistance they are putting up to Russian aggression. Refugees fleeing Ukraine already number in excess of 2 million and counting. Many are Ukrainian Jews. Those who are unable to leave or are engaged in the fight to slow the advance of Russian forces are subject to increasingly indiscriminate bombing and the threat of using more extreme military weaponry. Reports of targeting and killing civilians, including the bombing of hospitals and schools, raise serious questions about human rights violations and war crimes.

We invite acclaimed attorney, civil liberties defender and constitutional scholar Alan Dershowitz to discuss the actions of Russian forces in Ukraine and the potential case against Russia’s military leaders and in particular President Vladimir Putin. Are there legal avenues to pursue in the International Criminal Court or other international bodies, and how might such cases be brought?

What other avenues might we explore to tackle this human rights tragedy unfolding on multiple fronts? At this critical moment, Ukraine’s President Zelensky is standing up and defending his country and his people. Professor Dershowitz recently has made the case that Zelensky should be recognized immediately on the international stage for his commitment. As an emeritus professor of public law, Dershowitz will be nominating President Zelensky for this year's Nobel Peace Prize and urging the Committee to award it now. As Rabbi Hillel once said: "If not now, when?”

In Conversation with Dan Ashley 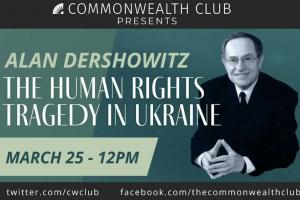 Alan Dershowitz on the Human Rights Tragedy in Ukraine