Despite controlling two of the three branches of government in Washington, the Democratic Party is struggling with its identity and the policies it should emphasize, particularly when it comes to reducing inequality and poverty at a time of deep divisions in the United States.

For decades, the Republican Party has been known as the party of the rich: arguing for "business-friendly" policies like deregulation and tax cuts. But as our national and global economy confronts a crisis of inequality, some, like increasingly visible political historian Lily Geismer, question whether the Democrats are willing or able to take political risks to pursue policies that would help address or reduce poverty.

In her powerful new book Left Behind: The Democrats' Failed Attempt to Solve Inequality, Geismer shows how she feels the Democratic Party of the 80s and 90s—particularly during the height of the Clinton Administration years—furthered policy ideas that centered on helping the poor without asking the rich to make any sacrifices: "Doing well by doing good" was a popular theme. Social enterprise and micro-lending became big businesses, and private programs to promote democracy and equality abroad grew trendy. But as social programs in the private sector boomed, the structure of the government in the United States began to weaken, according to Geismer, contributing to a crisis that has now fully arrived. And the Democratic Party is divided about how to respond, leaving the poor without a true champion, and the public unsure where one of the country's two major parties stands on inequality.

Please join us for an important discussion about poverty, the Democratic Party politics that make it harder to address, and where we can go from here.

Copies of Left Behind are available for purchase at checkout (for U.S. domestic shipping only).

In Conversation with Dan Pfeiffer 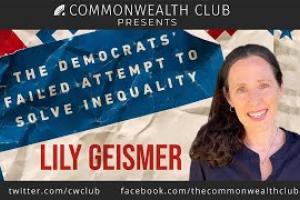