The January 6 attack on Congress as it met to certify Joe Biden's presidential victory is a day that will live on in infamy, yet for Maryland congressman Jamie Raskin, this was just the next in a sequence of tragic events that changed his life forever. Having lost his son to suicide only days before, and days later leading the ensuing impeachment effort against Trump, Rep. Raskin’s 45-day journey at the start of 2021 is an inspiring epic of strength, tragedy and determination.

In his new memoir, Unthinkable: Trauma, Truth, and the Trials of American Democracy, Raskin recounts that after the tragic loss of his son Tommy, it was Tommy’s values and vision for the country that provided him inspiration to not only weather the challenges of January 6 but to lead the ensuing impeachment trial of Donald Trump for inciting insurrection. Facing division and the tremors of a nation rocked to its core, Rep. Raskin and his nine-member team were able to lead the most bipartisan impeachment trial ever conducted.

Rep. Raskin has served as an elected official in Maryland since 2007 and represented its 8th Congressional District since 2017. A professor of constitutional law at American University Washington College of Law, chair of the House Subcommittee on Civil Rights and Civil Liberties, and co-chair of the Congressional Freethought Caucus, Raskin has been a leading voice in Congress for executive accountability and electoral integrity.

Please join us as congressman Raskin recounts his moving story of balancing tragic personal loss and appalling political violence simultaneously, and how he found hope to press on in his darkest moment to continue fighting for American democracy.

Special thanks to Common Sense Media. 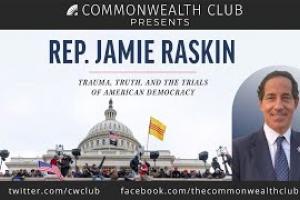