Jimmy Soni: The Inside Story of PayPal

How much do we know about the apps that we use daily? In the case of PayPal, relatively few know the early story of the now-behemoth. Its precarious origins—coming about in the limitless, tumultuous late 1990s and early 2000s meant it was far from a shoo-in. It faced staunch competition, never-before-seen levels of internet fraud, and internal friction that could’ve ruined its path to success.

Nowadays, PayPal is a household name. Its founders are among the best-known names in the tech industry: Peter Thiel, Elon Musk and Max Levchin, among others. Jimmy Soni’s book The Founders: The Story of PayPal and the Entrepreneurs Who Shaped Silicon Valley, details not only the meteoric rise of the company and its founders, but all that came before and made it possible. With privileged access to the internal materials of the company’s early days, Soni paints a picture of what brought together these tech giants and how they dared to dream of cashless currency when few others dared.

Jimmy Soni holds the answer to why this idea, out of the many it rivaled, won against the odds. Soni will bring to life the story of PayPal, highlighting not just the prominent founders but the unsung heroes that built the brick-by-brick success the company now touts.

Author, The Founders: The Story of PayPal and the Entrepreneurs Who Shaped Silicon Valley

In Conversation with Katherine Boyle 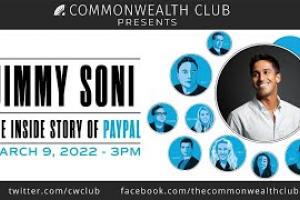 Jimmy Soni: The Inside Story of PayPal