Today, most people are familiar with the fascinating world of cryptocurrency, though some of us are more familiar than others. Many people only hear about it in the news and across social media platforms, while some individuals stake their livelihoods on investments in Bitcoin and other cryptocurrencies. According to crypto journalist Laura Shin, the total value of crypto assets today is just shy of $2 trillion. But that’s far from the most interesting aspect of an increasingly prevalent crypto fever.

Shin—"Unchained Podcast" host — will do more than explore the backgrounds of these uniquely decentralized currencies. She’ll hone in on Ethereum, the crypto network whose success has ignited the fire surrounding today’s cryptocurrencies, and the figures who made Ethereum’s success possible. From a child prodigy to a Goldman Sachs exec, the story of Ethereum’s rise is unlike that of any other—and Laura Shin, who previously served as Forbes’ first mainstream reporter of crypto assets, is just the person you’ll want to hear tell it.

In Conversation with Kate Clark 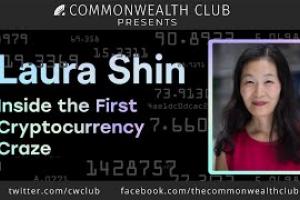