For Matthew Shilvock, general director of San Francisco Opera, being a part of last year's reemergence of the Opera onstage at the War Memorial Building, was to "experience the world in hyperreality" and reclaim the magic of nightly "emotional synergy with 3,000 strangers."

He will present the newly announced centennial roster; 2022 is "a celebratory season full of bold possibility, of new productions, new operas"—including Asian artists' reimagining of Madam Butterfly's notorious stereotypes that "honors the culture it represents and challenges its shortcomings."

We will be, Shilvock believes, "part of something quite extraordinary" as we turn the page on a second century and reclaim the bold ideals on which San Francisco Opera was founded.'" 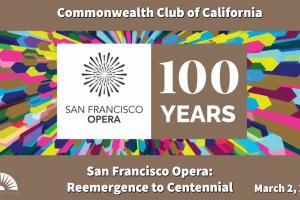