Heather McGhee: What Racism Costs Everyone

What does racism cost us? Tying together economics and deeply personal stories from across the United States that convey the cost of a broken system, political strategist Heather McGhee roots out the racist policies and politics that she says plague the finances and lives of Americans. In her debut book The Sum of Us: What Racism Costs Everyone and How We Can Prosper Together, she makes her case: racism and a flawed zero-sum structure are at the root of all our dysfunctions.

Traversing across the country, McGhee shares both the big picture and individual tales of the cost of playing the zero-sum game. McGhee brings people of all races and creeds to share their accounts of lost homes and lost dreams, owing to the mentality that some must lose for others to win. Indeed, in a system where education is a private commodity and incomes for many Americans have remained stagnant, she says winning is not an option.

Yet, there is reason for hope. In combat against this system, McGhee has seen sparks of a “Solidarity Dividend” that transcends racism and demands a win for all. McGhee will set out her vision for a future that moves beyond the zero-sum and into radical compassion to the benefit of all.

Copies of The Sum of Us are available for purchase at check-out (for U.S. domestic addresses only).

Chair of the Board, Color of Change; Author, The Sum of Us: What Racism Costs Everyone and How We Can Prosper Together; Twitter @hmcghee 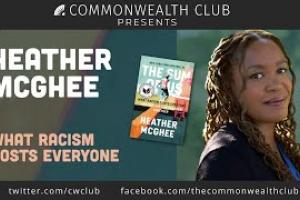 Heather McGhee: What Racism Costs Everyone