Are we alone? Avi Loeb, Harvard’s top astronomer, doesn’t seem to think so. He believes that our solar system was recently visited by advanced alien technology from a distant star. In 2017, scientists in Hawaii observed an object soaring through the sky, moving too fast along a strange orbit for Loeb to conclude that it was a regular asteroid. Instead, he suggested the object could be a piece of advanced technology created by a distant alien civilization.

In his new book, Extraterrestrial, Loeb takes readers inside the thrilling story of the first interstellar visitor to be spotted in our solar system. He outlines his controversial theory and its profound implications: for science, religion and the future of our species and planet. Loeb challenges readers to aim for the stars—and to think critically about what’s out there, no matter how strange it seems.

Join us as Avi Loeb takes us through a sky-bounding and mind-blowing journey of the wonders of space and what could be out there.

In association with Wonderfest.

In Conversation with Brian Hackney 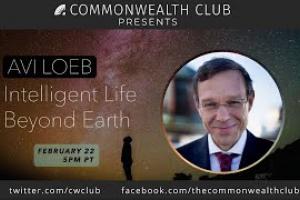