Shaka Senghor: A Father's Invitation to Love, Honesty and Freedom

Fatherhood is far from a one-dimensional experience—often, aspects of our identity such as race and other influential circumstances have influenced how we end up having and raising our children. Shaka Senghor, the New York Times bestselling author of Writing My Wrongs, can attest strongly to this fact: While Senghor's first son was raised during his time in prison, his second was born following his release. These contrasting experiences have not only taught Senghor the nuanced meanings of fatherhood in light of varying tribulations, but lessons that he wished he could’ve known throughout his life’s journey—both as a father and a son.

In his new book, Letters to the Sons of Society, Senghor translates wisdom about the meaning of manhood into yet another masterful work of text. He will do the same at INFORUM, conflating his book’s lessons about mental health, healing and masculinity into a must-have conversation designed to leave all men—fathers, sons and beyond—in a much better position to cultivate positive relationships with one another as their lives move forward.

Author, Letters to the Sons of Society: A Father's Invitation to Love, Honesty, and Freedom 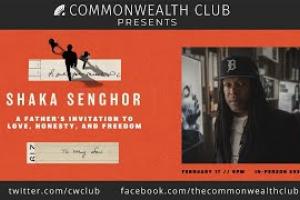 Shaka Senghor: A Father's Invitation to Love, Honesty, and Freedom