The most famous and most beautiful tomb in the world was born in the broken heart of Shah Jahan, when his wife Mumtaz Mahal died at 38 giving birth to their 14th child. The riches of the Mughal Empire were poured into this testament to his grief and to his love, as thousands of artisans labored between 1632 and 1643 to construct it, along with multiple other projects, including gardens, palaces and mosques. The expenditure was immense, even by today’s standards. The Taj Mahal and these other marble monuments were intended to serve the deceased and the living as well as the future of the Mughal house. Shah Jahan ruled until 1658, when he became seriously ill and was overthrown by his sons, each wishing to succeed him. He spent the last years of his life imprisoned and as disheartened as King Lear.

Join Humanities West in person at The Commonwealth Club, or via live stream, to gain a deeper understanding of the Mughal dynasty that created the Taj Mahal and what went into the construction of one of the most visited architectural wonders in the world—which never fails to impress visitors, no matter how high their expectations were. Fortunately, unlike the Egyptian pyramids, we actually know from Mughal records how and why the Taj Mahal was constructed. The story of the Taj Mahal is indelibly intertwined with the story of Shah Jahan, the fifth Mughal Emperor, who ruled a vast empire on the Indian subcontinent from 1628–1658. His many architectural achievements, in addition to the Taj Mahal, were made possible because of his extraordinary wealth.

Gulfishan Khan will provide a brief historical overview of the Mughal Emperor Shah Jahan’s reign, focusing on his early life with a discussion of his education, marriages and family life. His passion for building and the laying of gardens, such as the world famous Shalamar garden in Kashmir, will be covered, with attention to the emperor’s close relations with the architects and supervisors of imperial projects. In her talk she will also discuss diplomatic and cultural relations with Safavid, Ottoman and Central Asian counterparts, highlighting artistic and architectural exchanges from the Islamic world. Her talk will end with a description of the annual Urs (a ceremony marking the death anniversary) of Shah Jahan’s beloved queen Arjumand Bano, at the Rauza-i-Munawwara, the Illumined Tomb known to later generations as the Taj Mahal.

Catherine Asher will focus on the artistic achievement itself: how the Taj Mahal became reality from its inception to its completion, with attention to its remarkable artistic details. She will set this achievement in the context of that time—the previous Mughal artistic developments that had led to the training of so many skilled craftsmen who built not only the Taj Mahal but also the Red Fort and Jama Masjid in Delhi, the Moti Masjid in Agra, and the renovation of Agra Fort (and much more). All this was accomplished during Shah Jahan’s reign. Throughout her discussion she will interweave the Mughals' concept of state with architectural construction.

Note: Both speakers will be participating remotely. 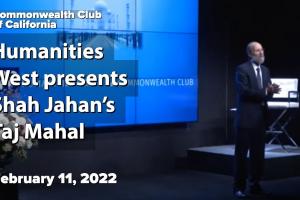