She's Got All the Answers: Jeopardy Champion Amy Schneider

"I lost to Amy Schneider, but now I want her to keep winning. I want her to keep breaking records. I'm rooting for her with my whole heart. And as cheesy as it sounds, being a part of Amy's winning streak—even as someone she defeated—is an honor." —"Jeopardy!" contestant Andrea Asuaje

Amy Schneider has been breaking records and earned more than $1 million as a contestant on the brainy quiz show "Jeopardy!" She's an engineering manager based in Oakland, California, as well as a transgender woman who has described her identity as "important, but also relatively minor."

There's nothing minor about her historic run on one of the most respected game shows in the country, and she's having a major impact on attitudes about the trans community.

Come meet Amy Schneider live, in-person, at The Commonwealth Club or watch online as we ask her a few questions of our own.

Before the program, join us in the Hormel Lounge for coffee and treats provided by TransClinique.

Thanks to TransClinique for providing coffee and treats for our pre-program reception in the Hormel Loung. TransClinique is a trans-owned and operated gender-affirming virtual clinic that was founded to serve trans and non-binary communities across the country by offering accessible telemedicine and on-demand HRT shipped right to your door. 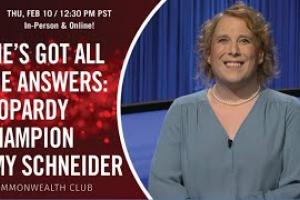 She's Got All the Answers: Jeopardy Champion Amy Schneider