It's one of the most-watched California elections this season.

Meet all four candidates seeking to succeed David Chiu representing District 17 in the California State Assembly. David Campos, Matt Haney, Bilal Mahmood and Thea Selby will make their cases to be sent to Sacramento, and we'll ask your questions.

David Campos has served as a San Francisco deputy city attorney, eventually serving as the general counsel for the city's school system. He also served as a San Francisco police commissioner, a supervisor representing District 9 on the San Francisco Board of Supervisors, deputy county executive for the County of Santa Clara and as San Francisco District Attorney Chesa Boudin’s chief of staff. In that role, he oversaw the day-to-day operations of the office, before taking leave during this final stretch of the campaign.

Bilal Mahmood is a civil servant and entrepreneur with experience in both the public and private sectors. He has a background as a neuroscientist, created a microlending nonprofit to help people lift themselves out of poverty, served as a policy analyst in the Obama administration, and helped restaurant workers in San Francisco offset lost wages during the COVID-19 pandemic.

Thea Selby has been a small business owner for more than 20 years. She is the co-founder of the Lower Haight Merchant and Neighbor Association, served seven years on the City College Board of Trustees, and co-founded Voices for Public Transportation. 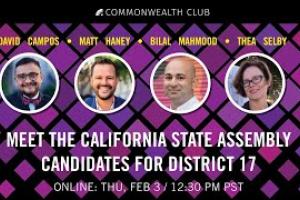