With deep political divides dominating America's civic culture and affecting how the United States is viewed abroad, civics education is increasingly being seen as a national security issue. Improving K–12 students’ understanding of America’s civic structures—from the Constitution to voting, to clarity about our national security institutions and how they operate within the rule of law—is being seen by national leaders as a way to strengthen the role of the United States in the world, and to protect the country’s national interests. Similar to the push for STEM education funding to address America’s global role in science and technology, many officials now support expanded funding for civics and history education as a way to improve student learning about their civic responsibilities in our participatory democracy.

Please join us as we discuss civics education and its role in boosting national resilience at this critical time in American history.

The program is part of the Commonwealth Club's Creating Citizens initiative. 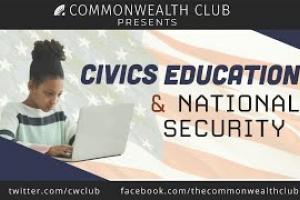