With a significant increase in hate crimes on the streets of America's cities as well as a rise in online hate, America finds itself on a terrifying path, one that could hardly be imagined just several years ago. Anti-Defamation League CEO Jonathan Greenblatt's current mission is making sure that what has happened in our lifetimes in Europe, the Middle East and Asia does not happen here.

In his new book, It Could Happen Here: Why America Is Tipping from Hate to the Unthinkable—And How We Can Stop It, Greenblatt demonstrates how antisemitism, racism, and other insidious forms of intolerance can destroy a society, taking root as quiet prejudices but mutating over time into horrific acts of brutality. His book sounds an alarm, warning that this age-old trend is gathering momentum in the United States—and that violence on an even larger, more catastrophic scale could be around the corner if we don't change our direction.

Greenblatt believes a more positive future can awaits us and that society doesn't have to succumb to hatred. Drawing on ADL’s decades of experience in fighting hate through investigative research, education programs, and legislative victories, as well as his own personal story and his background in business and government, Greenblatt offers a bracing primer on how we—as individuals, as organizations, and as a society—can strike back against hate.

Please join us for an important conversation with a national leader on the frontlines of fighting prejudice.

CEO, Anti-Defamation League; Author, It Could Happen Here: Why America Is Tipping from Hate to the Unthinkable—And How We Can Stop It 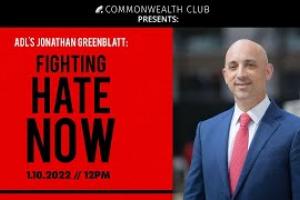