January 6 and the Insurrection: A Week to Week Political Roundtable Special

Exactly 12 months after a riot at the U.S. Capitol by supporters of then-President Donald Trump, we are going to take a look at what January 6 wrought, how it has affected the first year of Joe Biden's presidency, and what are the prospects for another violent attempt to overturn a democratic election. 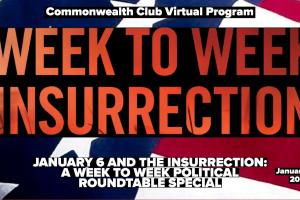 January 6 and the Insurrection: A Week to Week Political Roundtable Special