As we begin to come out of the COVID-19 pandemic, we look forward to a discussion with long-time San Francisco Bay Area community leaders. These community leaders are leading community-based organizations that are spearheading the way regarding social justice and uplifting our diverse communities.

Join us in-person or online as we discuss how they are helping people survive and thrive, even during a worldwide health crisis. Learn more about them and the amazing community work they have continued to do throughout the pandemic, as well as how others can support and uplift our own communities.

After the program, please enjoy some light bites and drinks courtesy of the Leo T. McCarthy Center for Public Service and the Common Good at the University of San Francisco.

Born and raised in San Francisco, Rudy Corpuz Jr. is the founder and executive director of United Playaz, a violence prevention and leadership development organization.  As an ex-felon, Corpuz got involved in the Second Chance program of the Extended Opportunity Program Services (EOPS) at San Francisco City College. Recently, United Playaz was able to purchase its building and Corpuz is now a stakeholder in the SOMA neighborhood and is working hard to build up the community that he once destroyed. Corpuz says he feels blessed to serve with the people and believes strongly in the UP motto that “It takes the hood to save the hood.”

Jacqueline Flin is executive director of the A. Philip Randolph Institute San Francisco (APRI). She began her professional career in 1999, a proud member or the Office and Professional Employees International Union, Local 3. In 2004, Flin returned to school and received a Bachelor of Science, in Cellular Biology from the University of California, Davis. Flin became the executive director of APRI in November of 2010. After volunteering at APRI’s Annual Turkey Basket Giveaway, she decided to return to the organization for which she had volunteered since her teenage years. Since assuming her position, she has lead APRI to higher grounds, advocating for low-income communities of color, developing targeted community outreach strategies, designing innovative career development services and expanding educational programming for youth and young adults. Flin currently serves as chair of the Bayview Citizen’s Advisory Committee. She has partnered APRI with the EcoCenter at Heron’s Head Park, an off-grid living classroom in a park that inspires visitors to protect our environment with technology and innovation concepts. She also serves as co-chair for the EcoCenter Advisory Committee.

Susana Rojas is the executive director for the Calle 24 Latino Cultural District. Rojas has been working in the community for the past 28 years, where she has dedicated her time and efforts to empowering and supporting the Latino community. When the COVID-19 pandemic hit, Rojas jumped into action and became the communications chair for the Latino Task Force and has been working to provide education, outreach and low-barrier easy-access vaccines and testing to the most vulnerable populations.

James Spingola was born and raised in San Francisco's Fillmore District. From an early age, Spingola became attracted to the opportunities available to young, impressionable men in his neighborhood, which ultimately led to his incarceration. Defeating the odds after several tries, James took a fruitful path to reentry, working three jobs — one at Ella Hill Hutch Community Center, which would prove life changing — and then landed a position at a local hospital. He was able to focus on helping the community, mentoring young people struggling with the same issues and poor choices that he had. In recognition for his providing quality support and services since 2004, in October 2018 Spingola was appointed to the Juvenile Probation Commission of the City and County of San Francisco. James Spingola, "Uncle" to many, understands the connection that young people are craving; his approach is centered around ensuring those critical connections are in place. Knowing his own successes are tied to someone taking a chance on him, James extends that same courtesy to every person who comes through the doors.

In partnership with the Leo T. McCarthy Center for Public Service and the Common Good at the University of San Francisco. The McCarthy Center is dedicated to inspiring and preparing students at USF to pursue lives and careers of ethical public service. It supports programs, curriculum and research that inform public policy and nurture purposeful lives.

Member, Juvenile Probation Commission of the City and County of San Francisco 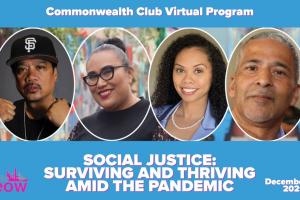