Join us to learn more about America’s modern culinary history told through the lives of seven pathbreaking chefs and food writers.

Who’s really behind America’s appetite for foods from around the globe? Award-winning author Mayukh Sen has produced a group biography about seven extraordinary women, all immigrants, who left an indelible mark on the way Americans eat today. His book Taste Makers stretches from World War II to the present, with absorbing and deeply researched portraits of figures including Mexican-born Elena Zelayeta, a blind chef; Marcella Hazan, the deity of Italian cuisine; and Norma Shirley, a champion of Jamaican dishes.

Mayukh Sen―a queer, brown child of immigrants―reconstructs the lives of these women in vivid and empathetic detail, daring to ask why some were famous in their own time, but not in ours, and why others shine brightly even today. Weaving together histories of food, immigration and gender, Sen challenges the way people look at what’s on their plate―and the women whose labor, overlooked for so long, makes those meals possible. He'll be joined on our virtual stage by Alicia Kennedy, author of the popular newsletter "From the Desk of Alicia Kennedy" and a forthcoming book on eating ethnically.

Mayukh Sen is a James Beard and IACP Award–winning writer based in Brooklyn. His work has been anthologized in two editions of The Best American Food Writing. He teaches food journalism at New York University.

Reem Assil is a Palestinian-Syrian chef based in Oakland, CA and owner of Reem’s California, a nationally acclaimed restaurant in Oakland and Reem’s California Mission in San Francisco, inspired by Arab street corner bakeries and the vibrant communities that surround them. Reem has garnered an array of top accolades in the culinary world, including back-to-back James Beard semifinalist nods for Best Chef: West. She is a graduate of the competitive food business incubator program, La Cocina, business leadership program Centro Community Partners, and Oakland-based business accelerator program ICA: Fund Good Jobs. Before dedicating herself to a culinary career, Reem spent over a decade as a community and labor organizer, building leadership in workers and residents to fight for living wages, affordable housing, and a voice in their jobs and their neighborhoods. Reem sits at the intersection of her three passions: food, community, and social justice. She uses food to invoke the central virtue of her Arab culture ⁠— hospitality ⁠— to build strong, resilient, and connected community.

Alicia Kennedy is a writer from New York based in San Juan, Puerto Rico. Her weekly newsletter on food culture, politics and media, "From the Desk of Alicia Kennedy," has more than 16,000 subscribers; GQ magazine said the "popular newsletter often wades into the thorniest thickets of the conversation."

This program is part of our Food Lit series, underwritten by The Bernard Osher Foundation. 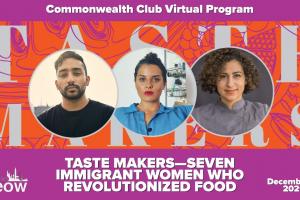