The conflict between Israelis and the Palestinians is one of the most complex and controversial disputes in the world today. It is a complicated conflict that plays a role in the foreign affairs of many countries around the world, including the United States. Yet many issues related to the conflict are misunderstood by people and groups across the political spectrum, sometimes intentionally, sometimes from just a lack of knowledge.

Daniel Sokatch, the head of the New Israel Fund—an organization dedicated to equality and democracy for all Israelis, not just Jews—is often asked to explain these issues as part of his job. In his new book, Can We Talk About Israel? A Guide for the Curious, Confused, and Conflicted, Sokatch offers his own primer on Israel and the Israeli-Palestinian issue. The book provides the long story of the Israeli-Palestinian conflict and gives basic explanations for the centuries-long conflict. Sokatch also attempts to explain why Israel (and the Israeli-Palestinian conflict) inspires such extreme feelings—why it seems as if Israel is the answer to "what is wrong with the world" for half the people in it, and "what is right with the world" for the other half.

As Sokatch asks in his book, is there any other topic about which so many intelligent, educated and sophisticated people express such strongly and passionately held convictions, and about which they actually know so little? This program will offer some background on this often misunderstood and complicated topic.

CEO, New Israel Fund; Author, Can We Talk About Israel? A Guide for the Curious, Confused, and Conflicted 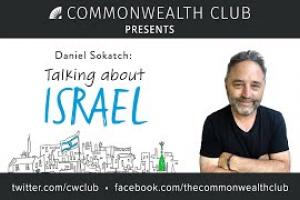