Jonathan Karl with Martha Raddatz: The Final Act of the Trump Show

Veteran journalist Jonathan Karl has known and covered Donald J. Trump longer than any other White House reporter. And during that time, he has been praised, taunted and branded an enemy of the people by President Trump himself.

So possibly nobody is in a better position to tell the story of the shocking final chapter of the Trump show than Karl. In his new book Betrayal: The Final Act of the Trump Show, Karl takes us behind the scenes of some of the darkest days in American history and shares what happened during the final weeks of the Trump presidency, the aftermath that followed, and what it means for the future of the Republican Party.

In Conversation with Martha Raddatz 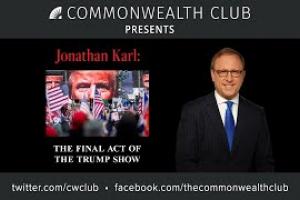 Jonathan Karl: The Final Act of the Trump Show