Mary C. Daly is the president and CEO of the Federal Reserve Bank of San Francisco. She returns to The Commonwealth Club for a much-anticipated discussion on how to approach monetary policy amidst the uncertainty of an economy still struggling to overcome the effects of the COVID-19 pandemic.

Since taking office in October 2018, Dr. Daly has committed to making the San Francisco Fed a more community-engaged bank that is transparent and responsive to the people it serves. She works to connect economic principles to real-world concerns and concentrates on monetary policy, labor economics, and increasing diversity within the economics field. Dr. Daly began her career with the San Francisco Fed in 1996 as an economist specializing in labor market dynamics and economic inequality. She went on to become the bank’s executive vice president and director of research. She currently serves on advisory boards for the Center for First-generation Student Success and the Maxwell School of Citizenship and Public Affairs at Syracuse University. She has also served on the advisory boards of the Congressional Budget Office, the Social Security Administration, the Office of Rehabilitation Research and Training, the Institute of Medicine, and the Library of Congress.

Mary C. Daly last appeared at the Club in March 2019. Watch or listen to that program.

Former Chief Economic and Business Advisor, Director of the Office of Business and Economic Development, State of California; Member, Commonwealth Club Board of Governors 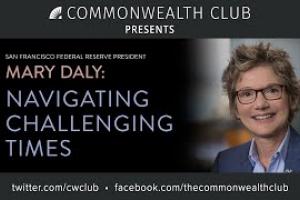