Alec Ross: The Raging 2020s and the Fight for Our Future

Corporate America and our government both hold the power to shape our daily lives. However, Alex Ross says recently there seems to be a blur between big business and Congress in the “new Gilded Age”. Private companies have become as powerful as countries, leading many to wonder about the implications for everyday people.

In the face of unprecedented global change, New York Times bestselling author Alec Ross proposes a new social contract to restore the balance of power between government, citizens and business in The Raging 2020s: Companies, Countries, People—and the Fight for Our Future.Through interviews with the world’s most influential thinkers and stories of corporate activism and malfeasance, government failure and renewal, and innovative economic and political models, Ross proposes a new social contract―one that resets the equilibrium between corporations, the governing, and the governed.

Join us as Alec Ross takes us through the changing landscape of the relationship between big business, government and people.

Distinguished Visiting Professor, The University of Bologna Business School; Former Senior Advisor for Innovation to the U.S. Secretary of State; Author, The Raging 2020s: Companies, Countries, People—and the Fight for Our Future

In Conversation with DJ Patil 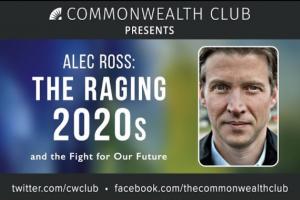 Alec Ross: The Raging 2020s and the Fight for Our Future