In Concert: Music of Polish-Jewish Composers

Please join us for a free one-hour concert of live chamber music by Polish-Jewish composers. This special concert is part of an international tour of the Polish Chamber Musicians’ Association entitled “Music of Polish-Jewish Composers,” visiting Los Angeles, San Francisco, Seattle, Paso Robles and New York (October–December 2021). The purpose of the concerts is to familiarize American audiences with previously uncelebrated artists from Poland's Polish-Jewish musical legacy, presented by outstanding Polish musicians. The concerts are financed within the scope of the Multiannual Program Independent 2017–2022, as part of the "Cultural Bridges" subsidy program of the Adam Mickiewicz Institute.

A short pre-concert introduction will also be given, exploring not only the difficult creative and life paths of the composers but also describing the musical atmosphere of multicultural Poland.

Simon Laks (1901–1983), a Polish Jewish composer and violinist, became head of the prisoners' orchestra at Auschwitz-Birkenau.

Henryk Wars (1902-1977), a Polish pop music composer, wrote scores for 50 films during the interwar period in Poland and 60 more in the United States.

Messages Quartet was founded in 2014 and in just one year won the Second Prize, Silver Medal and a Special Award for interpretation of Shostakovich’s Quartet in the Second International Competition of Chamber Music in Plovdiv (Bulgaria in 2015). The Quartet has also been recognized by the Polish Minister of Culture and National Heritage and in February 2016 was awarded a grant under the “Young Poland” Scholarship Programme, thanks to which, in 2017, the debut record of the ensemble containing the recording of string quartets by Szymon Laks was released by the record company DUX. The album received excellent reviews in the French, German, British, American and Polish press.

The ambition of the Messages Quartet is to promote Polish chamber music, especially the lesser-known and the most contemporary. Their repertoire includes works by Polish composers—Laks, Panufnik, Weinberg, Szymanowski, Moniuszko, Bacewicz—and other great masterpieces of quartet repertoire. The quartet has already had several world premieres of Polish and foreign composers.

"Messages Quartet has an instrumental 'sheen' to their sound that is quite unique among modern-day string quartets, which usually focus on the edginess of attack and drama in interpretation. Messages plays with plenty of energy, but their instruments also glisten. What a pleasure it is to just bask in their sound!”

A graduate of the Fryderyk Chopin University of Music in Warsaw, where she received a degree with honors in the studio of Prof. Roman Lasocki, Małgorzata Wasiucionek has also trained with Pierre Amoyal at the Universität Mozarteum in Salzburg. Having begun her musical education in Jelenia Góra under the tutelage of Ludmiła Sołowiewicz, Wasiucionek now holds a Doctor of Musical Arts degree and is an assistant professor at the Karol Szymanowski Academy of Music in Katowice. She also teaches violin performance at the Karol Szymanowski State Music Secondary School in Katowice. On an everyday basis, the artist is associated with the Messages Quartet, named in honor of Andrzej Panufnik and his ‘Messages’ String Quartet. This ensemble specializes in performance of contemporary music, as well as unjustly forgotten – especially Polish – works, and has released two CDs well received by critics: one with string quartets by Szymon Laks (DUX, 2017); and the other entitled Messages, with music by Andrzej Panufnik, Stanisław Moniuszko and Krzysztof Penderecki (DUX, 2019). Wasiucionek also took part in the Silesian Quartet’s recording entitled Grażyna Bacewicz: Silesian Quartet and Friends (Chandos, 2018), which won a Fryderyk award (2019). Since 2014, she has collaborated regularly with pianist Sylwia Michalik, with whom she concertizes and makes recordings.

The violinist has participated several times in the prestigious International Academy Switzerland, founded and led by conducting legend Seiji Ozawa. In 2015, she was honored by the maestro with the opportunity to take part in a festival to celebrate his 80th birthday – the Seiji Ozawa Matsumoto Festival in Japan. Wasiucionek has taken part in numerous workshops, working under the tutelage of distinguished artists, among others Ivry Gitlis, Wanda Wiłkomirska, Kaja Danczowska, Maxim Vengerov, Zakhar Bron, Roman Totenberg, Sadao Harada, Nobuko Imai, Pamela Frank, Gavriel Lipkind and Szymon Krzeszowiec.

The artist has performed as a soloist with both Polish and foreign orchestras, among others the Amadeus Polish Radio Orchestra; Sinfonia Varsovia; the Silesian, Rzeszów, Lower Silesian, Białystok, Zielona Góra, Lublin and Kielce Philharmonic Orchestras; as well as the Calgary Symphony, Loh-Orchester Sondershausen and Philharmonisches Orchester des Cottbus. Her repertoire includes the most outstanding works in the literature, among others violin concerti by such composers as Krzysztof Penderecki, Karol Szymanowski, Henryk Wieniawski, Johannes Brahms, Pyotr Tchaikovsky and Felix Mendelssohn-Bartholdy.

Oriana Masternak started her musical education at the age of 7. She graduated from the Academy of Music in Cracow, Royal Conservatorium in Brussels, European Chamber Music Academy, Yale School of Music and the University of Music and Performing Arts in Vienna. Her musical masters include renowned artists such as Johannes Meissl, Roman Reiner, Katalin Sebestyen, Małgorzata Skorupa, Magdalena Szczepanowska, and Tokyo Quartet. She participated in numerous master classes. In 2015 Oriana Masternak achieved a title of Doctor of Arts after completing her doctoral dissertation about the music of French composer Lucien Durosoir. Currently she works as an assistant professor at the Department of Violin and Viola at the Academy of Music in Cracow.

Oriana Masternak recorded for Polish Radio, DUX, Acte Prealable, SOLITON and many more. She performs solo and as a chamber musician in Asia, both Americas, and the majority of European countries. She took part in many festivals, such as Norfolk Chamber Music Festival (USA), Festival Pablo Casals (Prades), Mozartiade (Augsburg), Kalkalpen Festival (Grossraming), Pacific Music Festival (Sapporo), 21. Frühling Wiener Festival (Konzerthaus, Wien), and Polish Music Days (Moscow).  She performed in Musikveren in Vienna (2012), Pushkin Museum in Moscow (2014) and Carnegie Hall in New York (2015). In November 2019 Oriana was invited to perform 13 recitals in the most important concert halls in China (with Justyna Danczowska on piano). Since 2014 Oriana has been a founding member of Messages Quartet , an ensemble specializing in Polish music performance.

She is a member of the jury in international competition and is also invited to lead masterclasses in Poland and abroad (Brazil, Spain). Oriana Masternak plays on a Sebastian Lang violin of 1738.

Maria Shetty graduated with honors from the Academy of Music in Krakow in the class of Prof. Janusz Pisarski and asst. Aneta Dumanowska (2008). She did her postgraduate studies at Universtität für Musik und darstellende Kunst Wien under Prof. Wolfgang Klos and asst. Ulrich Schönauer (2009). She also developed her skills at the prestigious European Chamber Music Academy (2011) and at various master classes working under the guidance of musicians and ensembles, such as H. Beyerle, J. Meissl, P. Buck, A. Kouyoumdjian, Apollon Musagete Quartet, and the Tokyo String Quartet. In 2021 she achieved the title of Habilitated Doctor of Arts.

Since 2011, she has been a violist at the National Polish Radio Symphony Orchestra in Katowice. She also cooperates with other Polish orchestras, such as Sinfonietta Cracovia and Capella Cracoviensis.

She has won national and international competitions, namely the Second Prize and Special Prize for Interpretation of Shostakovich's Music at the International Chamber Music Competition in Plovdiv (2015), Second Prize and Special Prize Baerenreiter Urtext Preis at the Charles Hennen Concours in Holland (2011), and Third Prize at the International Competition of Contemporary Chamber Music in Krakow (2007). Maria has received numerous scholarships from Programme "Young Poland", Polish Ministry of Culture and National Heritage Republic of Poland, Scientific Scholarship of City of Krakow, the European Chamber Music Academy, Pacific Music Festival in Japan, and the Adam Mickiewicz Institute.

As a chamber musician, Maria Shetty regularly performs in various formations and takes part in NOSPR Chamber Series. She has performed in festivals, such as Festival Pablo Casals (Prades), Mozartiade (Augsburg), Kalkalpen Festival (Grossraming), Pacific Music Festival (Sapporo), the Internationales Musikfest Goslar-Harz, and Music Autumn in Przemysl. In 2014, she co-founded Messages Quartet, an ensemble specializing in the performance of Polish chamber music. The quartet has performed many times in Poland and abroad.  In 2017, their debut album containing the recording of string quartets by Szymon Laks was released by the record company DUX. The album received excellent reviews in the French, German, British, American, and Polish press. At the end of 2019, the second album of Messages Quartet was released, entitled "Messages," which includes compositions by A. Panufnik, S. Moniuszko and K. Penderecki. As a chamber musician, Maria records for DUX, Acte Prealable and Chopin University Press.

In 2016 she started teaching as an assistant in the viola class of Prof. Janusz Pisarski at the Music Academy in Krakow. She also conducted music courses in  Poland and abroad (e.g. Brazil). Since 2016, she has been conducting the viola class at the Małopolska Academy of Talents.

Beata Urbanek-Kalinowska graduated with distinction from the Music Academy in Kraków in the cello class of prof. Zdzisław Łapiński, she obtained the Diplôme Supérieur d’Enseignement - A l’unanimité at the Ecole Normale de Musique de Paris Alfred Cortot in the class of prof. Paul Julien. She completed postgraduate studies in the Solistenklasse at the Staatliche Hochschule für Musik und Darstellende Kunst in Stuttgart in the cello class of Professor Peter Buck.

Since 2007 she has been a professor in the Chamber Music Department of the Music Academy in Krakow. In 2018, she received habilitation in musical arts.

In 2014, Beata co-created Messages Quartet, which is among the best Polish string quartets. She is a laureate of competitions: she won the 2nd prize and the Special Award “Shostakovich Prize” at the 2nd International Chamber Music Competition in Plovdiv in Bulgaria (with the Messages Quartet in 2015), 3rd prize at the 4th International Johannes Brahms Chamber Music Competition in Gdańsk (2006), the Special Award “Bräuer Optik Spezial Preis für Kammermusik” at the 13th Internationales Klassikfestival in Allgäu in Germany (2005), the 1st prize at the Competition for the best interpretation of Krzysztof Penderecki’s pieces for cello solo in Kraków (2003), the 1st award in the Trio category at the 7th International Contemporary Chamber Music Competition in Kraków (2003). She has participated in masterclasses under the direction of, among others, Krzysztof Penderecki, Stanisław Firlej, Angelika Mai, Peter Buck, Christian Euler, Marco Ylönen, Ralf Gothóni, and Arvid Engegard.

She performs at festivals in Poland and abroad. With Nigel Kennnedy, with whom she has worked since 2010, she has recorded albums for Sony Classical - The Four Elements, The new Four Seasons, and in 2018 for Warner Classics, Kennedy meets Gershwin. She performed in the most prestigious concert halls in Germany, Great Britain, France, and Switzerland. As a guest concertmaster, she has worked with several orchestras: Russische Kammerphilharmonie of St. Petersburg, Oberösterreichische Jugendsinfonieorchester, Capella Gedanensis, Orchester Philharmonique de Nice. As a cello leader, since 2003, she collaborates with the Beethoven Academy Orchestra, of which she is a co-creator. Beata has also made recordings for the DUX publishing house as well as for the labels Acte Préalable, Solo Musica, and Universal Music Polska.

She is a scholarship holder of the "Young Poland" program, a laureate of the scholarship of the Polish Minister of Culture and National Heritage. and of other Foundations supporting young talents.

The concerts are financed within the scope of the Multiannual Program Independent 2017–2022, as part of the "Cultural Bridges" subsidy program of the Adam Mickiewicz Institute.

Honorary Consulate of the Republic of Poland in San Francisco 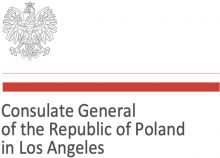 and The Commonwealth Club of California