In 2015, renowned writer Sam Quinones woke up many Americans to the dangers of the opioid epidemic with his award-winning book Dreamland: The True Tale of America's Opiate Epidemic. In his new book, The Least of Us: True Tales of America and Hope in the Time of Fentanyl and Meth, Quinones follows up Dreamland with an exploration of the terrifying next stages of the opioid epidemic, and the stories of individuals and communities that have fought back.

Quinones was among the first journalists to capture the true danger presented by synthetic drugs. In fentanyl, traffickers landed a painkiller a hundred times more powerful than morphine, and laced it into cocaine, meth, and counterfeit pills, causing tens of thousands of deaths—at the same time as Mexican traffickers made methamphetamine cheaper and more potent than ever. Combined, these new synthetic drugs wrecked communities across the country, particularly rural areas, led to a surge of mental illness concerns, and fed a growing homelessness problem throughout the United States. Quinones explores these issues and more.

At a time of great despair because of multiple drug epidemics, Quinones also finds sources of hope, in communities fighting back against rampant synthetic drug issues and helping individuals repair their lives. Quinones concludes that the nation has forsaken “what has made America great” and that “when drug traffickers act like corporations and corporations like drug traffickers, our best defense, perhaps our only defense, lies in bolstering community.”

Please join us for an important conversation on one of the country's most challenging problems, and what we all can do to rise to the challenge.

Journalist; Author, The Least of Us: True Tales of America and Hope in the Time of Fentanyl and Meth 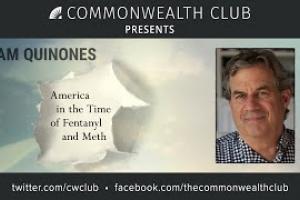