Since the killing of George Floyd in May 2020, Americans have been engaged in a vast discussion on the state of race in America. Like many topics in the country, the issue has become a divisive, tense debate about how the country faces its racist past, the meaning of systemic racism, the role of critical race theory in K–12 schools and universities, and what it means to be "anti-racist" during this challenging moment in American civic life.

Renowned linguist and award-winning writer John McWhorter feels this debate and discussion has been dominated by a "woke mob" that subscribes to theories that are illogical, unreachable and, ultimately, racist in their impact, however unintentional those effects may be. In his book Woke Racism: How a New Religion Has Betrayed Black America, McWhorter argues that an "illiberal neoracism," disguised as antiracism, is hurting Black communities and weakening the American social fabric.

In Woke Racism, McWhorter reveals the workings of this new progressive approach toward race, from the original sin of “white privilege” to the weaponization of cancel culture to ban heretics. His book sets out to show how efforts that claim to “dismantle racist structures” are actually harming his fellow Black Americans by infantilizing Black people, setting Black students up for failure, and passing policies that disproportionately damage Black communities. Some may call it “antiracism,” but to McWhorter, it features a racial essentialism that’s barely distinguishable from racist arguments of the past.

Please join us for an important discussion on the limits of antiracism with an increasingly visible writer who has a different roadmap to justice that he believes will help, not hurt, Black America. 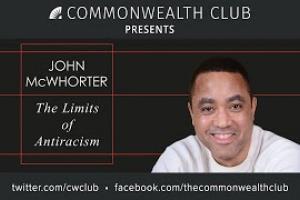