Queer Asians and Pacific Islanders: Our Future Determines Our Past

Welcome to Hearts and Minds—A QTAPI Community Conversation Series, Session Two: Asians and Pacific Islanders: Our Future Determines Our Past.

"Our future determines our past" is a play on words and ideas of how people are taught that the past can determine who we are. Though people can understand the past, will they necessarily learn from it to make decisions that make the future stronger and more just and equitable?

When we are ashamed of some aspects of our history, do we not speak of it or acknowledge it? In the present, our relationship to the past—how we appreciate it, amplify it, and even shine light on the darkest aspects, can determine our relationship to that past and what we do with it and how we grow and evolve as a community. How can people, in the diversity of the Asian and Pacific Islander communities, honor and embrace all of these histories? This legacy can help people know their histories about resilience and strength as they stand on the shoulders of ancestors.

The future may be undetermined, but we hope this conversation inspires folks to envision what sort of future they would like for their communities to be centered in and how they might participate in achieving that vision.

Funded by the CA Humanities, whose mission is “to connect Californians to ideas and one another in order to understand our shared heritage and diverse cultures, inspire civic participation, and shape our future.” That is the shared vision for Hearts and Minds: A QTAPI Community Conversation Series,” and it is to that end that GAPA Theatre’s “Hearts and Minds” program continues its work in ensuring our QTAPI stories continue to be told.

Peter Tuiolosega Silva is the executive director of Kumukahi Health + Wellness, located on the island of Hawai'i. Peter has been an HIV advocate in the Pacific Island community for more than two decades, serving as the HIV trainer for the Pacific Islands, coordinator for the Pacific Island Jurisdictions AIDS Action Group, founder of UTOPIA Hawai'i, and prevention director of Life Foundation. Silva was most recently a public servant in the Hawai'i Department of Health’s Harm Reduction Services Branch. He currently lives in Hilo with his partner of 25 years.

Amy Sueyoshi is dean of the College of Ethnic Studies at San Francisco State University. Sueyoshi holds a Ph.D. in history from the University of California, Los Angeles and a B.A. from Barnard College and has published two books: Queer Compulsions: Race, Nation, and Sexuality in the Affairs of Yone Noguchi and Discriminating Sex: White Leisure and the Making of the American “Oriental.”  Sueyoshi also authored “Breathing Fire,” a brief survey of queer APIDA history, for the National Parks Service’s historic LGBT Theme Study, which won the Paul E. Buchanan Award from the Vernacular Architecture Forum. Sueyoshi is also a founding co-curator of the GLBT History Museum, the first queer history museum in the United States, and seeded the intergenerational Dragon Fruit Oral History Project at API Equality Northern California. Currently, Sueyoshi is co-chairing QHC 22, an international queer history conference hosted by the American Historical Association’s Committee on LGBT History.

Helen Zia is the author of Asian American Dreams: The Emergence of an American People, a finalist for the prestigious Kiriyama Pacific Rim Book Prize and referred to by President Bill Clinton in two separate speeches in the Rose Garden. She coauthored, with Wen Ho Lee, My Country Versus Me, which reveals what happened to the Los Alamos scientist who was falsely accused of being a spy for China in the “worst case since the Rosenbergs.” She was executive editor of Ms. Magazine and is a founding board co-chair of the Women's Media Center. Her articles, essays and reviews have appeared in numerous publications, books and anthologies, receiving awards for her ground-breaking stories.

The daughter of immigrants from China, Helen has been outspoken on issues ranging from human rights and peace to women's rights and countering hate violence and homophobia. She is a Fulbright Scholar and a graduate of Princeton University’s first coeducational class. She attended medical school but quit after completing two years, then went to work as a construction laborer, an autoworker, and a community organizer, after which she discovered her life’s work as a writer.

Producer and Host, "The Michelle Meow Show," KBCW TV and Podcast; Member, Commonwealth Club of California Board of Governors—Host 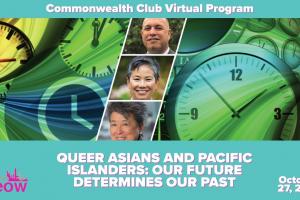 Queer Asians and Pacific Islanders: Our Future Determines Our Past