Joe Weisberg: Do We Have Russia Upside Down?

Join us for a conversation with Joe Weisberg, who makes the case in his new book, Russia Upside Down, that America's foreign policy toward Russia is failing, and we'll never fix it unless we rethink our entire relationship. Weisberg came of age in America in the 1970s and '80s as a Cold Warrior. He studied Russian in Leningrad, and then joined the CIA—just in time to watch the Soviet Union collapse.

Less than a decade later, though, a new Cold War broke out. Russia had changed in many of the ways that America hoped it might. It had become more capitalist, more religious, more open to Western ideas. But U.S. sanctions crippled Russia's economy, and Russia's internet-based retaliations have exacerbated our own political problems. Weisberg says the old paradigm—America, the free capitalist good guys, fighting Russia, the repressive communist bad guys—simply doesn't apply anymore. But we've continued to act as if it does.

Weisberg asks hard questions about our foreign policy and attempts to understand what Russia truly wants. He concludes that we are fighting an enemy with whom we have few if any serious conflicts of interest, we are fighting this unnecessary war with ineffective and dangerous tools, and our approach is not working anyway. With our own political system in peril, and continually being buffeted by Russian attacks, he argues that we need a new framework. Urgently. Weisberg makes it clear what the stakes are and lays out the foundation for a new American foreign policy for dealing with Russia.

Copies of Russia Upside Down are available for purchase at check-out (delivery to U.S. domestic addresses only). 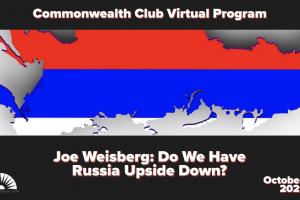 Joe Weisberg: Do We Have Russia Upside Down?