Is intentional misgendering a crime? Should it be? How does it affect the person who is the subject of the treatment? In July 2021, a California district court struck down a provision of the LGBTQ Long-term Care Facility Residents' Bill of Rights that banned nursing home staff from "willfully and repeatedly" misgendering or using the wrong name to refer to a resident when they've been clearly informed of the preferred name or pronoun.

That provision, known as the "pronoun provision," was ruled to be an infringement on free speech, with one of the judges writing that "misgendering may be disrespectful, discourteous and insulting, and used in an inartful way to express an ideological disagreement with another person's expressed gender identity," but the First Amendment "does not protect only speech that inoffensively and artfully articulates a person's point of view."

Advocates for LGBTQ seniors, and especially for transgender and gender nonconforming seniors, have called the decision alarming. Openhouse, a San Francisco-based LGBT senior housing, community and services organization, states "Misgendering can be harmful to a resident, particularly as it relates to feelings of safety, acceptance and isolation."

Join us for a live-stream discussion among advocates and professionals working with transgender and nonconforming seniors about the impact of the ruling and proposals for what to do next.

Directing Attorney, Justice in Aging; Author, Long-Term Care Advocacy and 25 Common Nursing Home Problems — and How to Resolve Them 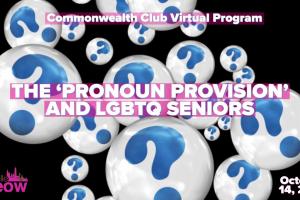