In his new book Rationality: What It Is, Why It Seems Scarce, Why It Matters, popular psychologist and author Steven Pinker explores the concept of collective rationality in society. Today, humanity is reaching new heights of scientific understanding, yet we continue to produce fake news, medical quackery and conspiracy theories. Pinker explains this by rejecting the cynical cliché that humans are simply irrational, arguing instead that the rational pursuit of self-interest, sectarian solidarity, and uplifting mythology can add up to crippling irrationality in a society.

Over time, humans have discovered the laws of nature, lengthened and enriched our lives, and set out the benchmarks for rationality itself. But despite our sensible thinking in the low-tech contexts in which we spend most of our lives, he says we often fail to take advantage of the reasoning we’ve discovered over the millennia: logic, critical thinking, probability, correlation and causation, and optimal ways to update beliefs and commit to choices individually and with others.

Pinker asserts that a society that is collectively rational depends on objectivity and truth—and that this kind of thinking leads to better individual choices and is the ultimate driver of social justice and moral progress.

Join Steven Pinker and Lara Bazelon as they delve into his new book and reveal how today’s society, in all its complexity, is formed by our collective human nature.

Tickets include a copy of Rationality (U.S. domestic shipping only).

The Commonwealth Club thanks the Ken & Jackie Broad Family Fund for its partnership.

Johnstone Professor of Psychology, Harvard University; Author, Rationality: What It Is, Why It Seems Scarce, Why It Matters; Twitter @sapinker 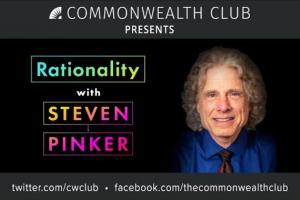