Before Fiona Hill became a celebrated foreign policy expert and key witness in the 2019 impeachment trial of then-President Donald Trump, she was a coal-miner's daughter from northern England in a town where the last of the coal mines had closed. Her father urged her to get out, saying “There is nothing for you here, pet.”

Hill went on to study in Moscow and at Harvard and served under three United States presidents. But in both Russia and the United States, she saw troubling reflections of her hometown and similar populist impulses. Her new book, There Is Nothing for You Here: Finding Opportunity in the Twenty-First Century, draws on her own journey out of poverty and her unique perspective as a policymaker to warn that America is on the brink of socioeconomic collapse and an authoritarian swing that could rival modern Russia.

In her powerful and deeply personal account, Hill reveals why expanding opportunity for desperate and forgotten Americans is the only long-term hope for our democracy. Join us as she reflects on her own experience and expertise to analyze the future of American democracy.

Copies of There Is Nothing for You Here are available for purchase at check-out (for shipment to U.S. domestic addresses only).

Former Senior Director for Europe and Russia, National Security Council; Senior Fellow, Brookings Institution; Author, There Is Nothing for You Here: Finding Opportunity in the Twenty-First Century

In Conversation with Ellen Nakashima 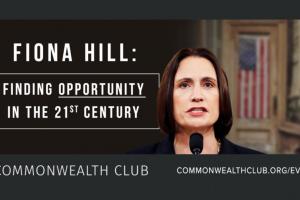