Celebrate National Coming Out Day with Pixar's 'Out'

Monday, October 11 is 2021 National Coming Out Day. Join us for a screening of the Pixar short film Out plus fascinating conversation with a talented Pixar animator who directed Out and the filmmaker who produced Out.

Steven Clay Hunter joined Pixar Animation Studios in 1997 and has worked as an animator on a number of Pixar’s most beloved films, including A Bug’s Life, Toy Story 2 and Finding Nemo. He was an animation supervisor on The Incredibles, WALL•E and Brave. Recently, he helped bring to life the characters Hank from Finding Dory (for which he won the 2013 VES award) and Duke Caboom from Toy Story 4.

Most recently, Hunter made his directorial debut with the SparkShort Out on Disney+, which was shortlisted for an Oscar Nomination this past year. In addition, Out is nominated for a GLADD award. Prior to coming to Pixar, Hunter worked for Walt Disney Animation on many projects, including Fantasia 2000 and Hercules. He first learned computer animation at Industrial Light & Magic on Casper the Friendly Ghost.

Max Sachar is a San Francisco-based filmmaker and film producer, and for the past 15 years he has worked at Pixar Animation Studios on critically acclaimed short & feature films, including Coco, Incredibles 2, Wall-E, Toy Story 3, and Lou. Most recently, Sachar produced Pixar’s 2020 Academy Award Shortlisted film Out (written and directed by Steven Clay Hunter). As producer, he worked creatively with the director to help navigate the story and visual development, while also focusing on casting, staffing all art and technical teams, and making strategic decisions around the schedule and budget.

In addition to his work at Pixar, Max is a co-director and cinematographer for Concept o4 films, where he has helped created several award winning dance films. During what’s left of his free time, Max spends as much time in the outdoors with his fiancé and 2 pups, and roaming the streets of his hometown, San Francisco, camera in hand.

Before the program, join us for a complimentary tea-time themed light lunch. Event food and beverages sponsored by Serramonte Ford, The Castro Car Guy and The Chairman Restaurant (Chairman Bao). 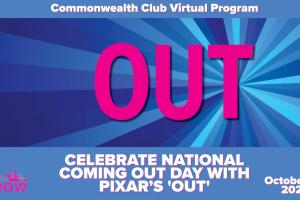