John Lithgow: A Confederacy of Dumptys

John Lithgow’s acclaimed acting career has seen him star in shows like “3rd Rock from the Sun” and “The Crown” and films such as Bombshell and The World According to Garp.

In his newest collection of satirical poems and illustrations, Lithgow expertly tracks the dark and lyrical stories of 25 “American Scoundrels.”

Join us as award-winning actor, author and illustrator John Lithgow presents the stories of both long-forgotten figures and the bad actors of today.

Actor; Author and Illustrator, A Confederacy of Dumptys: Portraits of American Scoundrels in Verse 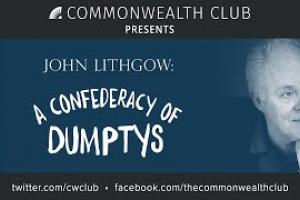 John Lithgow: A Confederacy of Dumptys