In September 2019, Purdue Pharma, the maker of OxyContin, filed for bankruptcy to protect itself from 2,600 lawsuits for its role in fueling the U.S. overdose crisis. Author and activist Ryan Hampton served as the co-chair of the official creditors committee that acted as a watchdog during the process—one of only four victims to act as representatives of big insurance companies, hospitals, and pharmacies.

Though Hampton originally believed that holding Purdue to account would be enough to right the scales of justice, he soon came to learn that, no matter what the media said, Purdue did not do this alone. Hampton argues they were in fact aided and abetted by the very systems that were supposed to protect Americans.

Unsettled: How the Purdue Pharma Bankruptcy Failed the Victims of the American Overdose Crisis is Ryan Hampton’s look into what happened behind closed doors—the story of a broken system that failed to protect people over profits, and let millions of lives be destroyed by the opioid crisis. From Purdue’s bankruptcy proceedings to the company’s eventual restructuring and the evasion of true accountability, Unsettled is also the untold story of how a group of determined ordinary people tried to see justice done against the odds and in the face of brutal opposition from powerful institutions.

Join us for Ryan Hampton’s inside account of Purdue Pharma’s role in the overdose crisis—and for a chilling exposé of those who circumvented justice.

In Conversation with Beth Macy 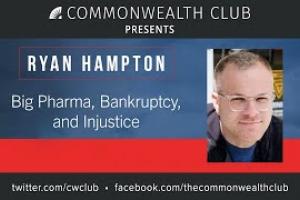