On July 14, 2021, lesbian feminist Sally Miller Gearhart passed away at the age of 90. In 1973, she had become the first out lesbian to obtain a tenure-track faculty position when she was hired by San Francisco State University, where she helped establish one of the country's first women and gender study programs. In her long life, she was a teacher, feminist, science fiction writer and political activist.

Join us for a special program in tribute to her; we will also reveal exclusive clips from a documentary now in production on Sally Gearhart's life. A complimentary lunch will be provided for in-person attendees.

Ondine Rarey is a filmmaker, writer and editor. Her mockumentary A Portrait of Female Desperation was the recipient of six film festival awards. Her documentary Fools and Heroes was a Grimme-Preis nominee (the German equivalent of an Emmy), aired on ARTE in France as well as stateside on PBS. She has edited more than a dozen documentary features and shorts, including Who Will Tell Our History, Now en Español (for PBS) and, most recently, Rebel Hearts, directed by Pedro Kos and produced by Anchor Entertainment and Level 4. She has edited on multiple TV series, including “Alien Encounters” and “Keeping up with the Kardashians.” She is also co-producer and editor on Sally, a feature documentary-in-progress. Ondine received a BA from UC Berkeley in history and a BFA in documentary and journalism from the Munich University for Television and Film in Germany. She currently resides in Los Angeles, where she teaches documentary editing at Chapman University.

Jörg Fockele is an award-winning filmmaker, executive producer and television director/producer with a career spanning 25 years. He has written and directed more than 10 short films, 4 feature documentaries and numerous music videos and PSAs. In addition, Fockele is a critically acclaimed television director of shows such as Bravo’s “Queer Eye,” ABC ’s “Wife Swap,” MTV’s “Savage U,” the Sundance Channel’s “Big Ideas for a Small Planet” and AMC’s “Small Town Security.” Of the awards and distinctions Fockele has received, the most important ones are retrospectives at the Goethe Institutes in New York City, San Francisco, Chicago and Mexico City, 2 Emmys and a special prize from the International Film Festival in Berlin. Current projects include the development of “Divine Deviance,” a doc tv series with comedienne Margaret Cho and Sally.

Deborah Craig is an award-winning documentary director and producer whose films use compelling personal stories to raise awareness about the challenges and strengths of underrepresented communities. Her work has played at LGBTQ+, women’s and documentary film festivals in the United States and internationally. Craig’s most recent short, “A Great Ride,” a 33-minute documentary about lesbians and aging, premiered at the Frameline LGBTQ+ Film Festival in San Francisco in 2018, was picked up for distribution by Frameline, has screened at more than 50 film festivals around the globe, and has won multiple awards. Sally will be her first feature-length documentary. Deborah has a BA in history from Columbia University, did undergraduate work in photography at California College of the Arts, and has a Master of Public Health from San Francisco State University, where she currently teaches in the Public Health Department.

Melanie Nathan, the executive director of the African Human Rights Coalition, is an internationally renowned award-winning activist, blogger and motivational speaker specializing in human rights, LGBTQI issues, politics, and current events. She practiced as a lawyer in apartheid-era South Africa before immigrating to the United States, where she continues her human rights advocacy, working to promote and protect the human and civil rights of LGBTQI individuals and communities, with a focus on LGBTI asylum seekers and refugees. She was appointed as a Marin County Human Rights Commissioner, vice president on the Board of Fair Housing Advocates, and elected vice president of the Board of San Francisco Pride for 2015–2017. She has spoken on Pride main stages in the United States and South Africa, and has been a keynote speaker at events, on panels, at conferences and schools around the world.

This is a free program; for online tickets, please pre-register to receive a link to the live-stream event.

There is a complimentary lunch provided for in-person attendees.

This program has 2 types of tickets available: In-person and online-only. Please pre-register to receive a link to the live-stream event.

• In-person capacity is limited.
• Masks are required in the building.
• We follow best practices laid out by the CDC and state and local guidelines.
• All guests, staff and volunteers must be vaccinated and show proof of vaccination.
• Elevators are limited to a maximum of four (4) people at a time.

See more upcoming (and past) Michelle Meow Show programs at The Commonwealth Club.

Fockele photo by Ana Grillo; and Gearhart photo by A. Kate Fritsch.

Documentary Director and Producer, including "A Great Ride" and Sally

Filmmaker; Writer and Editor, including A Portrait of Female Desperation and Sally

Producer and Host, "The Michelle Meow Show" on KBCW and Podcast; Member, Commonwealth Club Board of Governors—Host 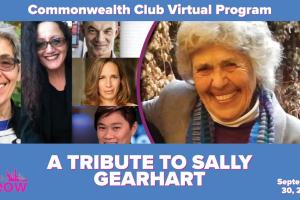