Stevie Van Zandt: My Story, from Springsteen to 'The Sopranos'

Famed musician and actor Stevie Van Zandt has an incredible story to tell. About rock and roll, about acting, about activism, about being on the biggest music stages in the world, and as part of one of the most revered programs in cable television history. HIs story is truly a one-of-a-kind, American story and in his new book, Unrequited Infatuations: A Memoir, Van Zandt tell his story like never before and in his own words.

The story begins in a bedroom in suburban New Jersey in the early '60s. While still a teenager, he met Bruce Springsteen, a like-minded outcast who became one of his most important friends and bandmates. As Miami Steve, Van Zandt anchored Springsteen's backing band, the E Street Band, as they conquered the rock-and-roll world. In the early '80s, Van Zandt stepped away from E Street to embark on his own personal journey. He refashioned himself as Little Steven, a political songwriter and performer who visited the world’s hot spots as an activist. Most famously during this time, he masterminded the recording of “Sun City,” an anti-apartheid anthem that sped the demise of South Africa’s apartheid regime, and helped get Nelson Mandela out of prison.

By the '90s, Van Zandt had lived at least two lives—one as a mainstream rocker, one as a hardcore activist. Then he started is third life (in addition to reuniting with the E Street Band) that made him become more well-known than ever: that of a gritty, talented actor. His role as Silvio Dante on "The Sopranos" helped raise Van Zandt's visibility even higher and rounded out a life of true creative impact.

Please join us for an intimate discussion with the one-and-only Stevie Van Zandt as he discusses the life he has led, his love of rock music and his love of creativity.

Copies of Unrequited Infatuations are available for purchase at checkout (shipping to U.S. domestic addresses only). 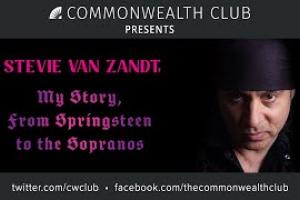 Stevie Van Zandt: My Story, From Springsteen to the Sopranos