Join this important discussion to learn how the White House is forming critical partnerships across sectors to fight anti-Asian hate crimes, moving forward the administration's Build Back Better Agenda to rebuild the economy, and ensuring the advancement of the Asian American/Native Hawaiian/Pacific Islander (AA and NHPI) communities. Attendees will have the opportunity to identify issues the AA/NHPI communities may want to prioritize and ask questions.

Erika Moritsugu was appointed in April by President Biden to serve as deputy assistant to the president and AA/NHPI senior liaison. She engages with AA and NHPI communities and leaders on issues such as advancing safety, justice, inclusion, and opportunity through a whole-of-government approach to racial justice.

She previously served in the Obama administration as assistant secretary for congressional and intergovernmental relations at the Department of Housing and Urban Development under Secretary Julián Castro and was the first-ever Senate deputy legislative director at the Consumer Financial Protection Bureau. On Capitol Hill, she served as senior representative of Senator Tammy Duckworth of Illinois. She also worked for Senator Daniel K. Akaka of Hawai‘i and at the Senate Democratic Policy Committee under Senate Majority Leader Harry Reid.

In the nonprofit sector, Moritsugu managed two teams at the National Partnership for Women & Families for economic justice and congressional relations, advancing workforce and health policies through a gender equity and race equity lens. She also led the Government Relations, Advocacy and Community Engagement team at the Anti-Defamation League.

She will be in conversation with Dion Lim, anchor/reporter for ABC 7 Television News in San Francisco. 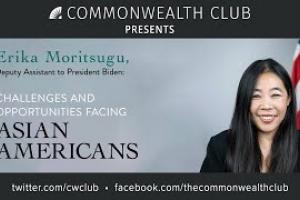