A celebrated revolution brought freedom to a group of enslaved people in northern India. Or did it?

Join us for a conversation with Dr. Laura Murphy, who will join us live from the United Kingdom to talk about the fascinating story of Freedomville, a town founded by slaves in India.

Millions of people today are still enslaved, and nearly 8 million of them live in India, more than anywhere else. Murphy reveals the story of a small group of enslaved villagers in the Indian state of Uttar Pradesh who founded their own town of Azad Nagar―Freedomville―after staging a rebellion against their slaveholders. International organizations championed it as a non-violent "silent revolution" that inspired other villagers to fight for their own freedom. But Murphy, a leading scholar of contemporary global slavery who spent years researching and teaching about Freedomville, found that there was something troubling about Azad Nagar's success.

Freedomville's enormous struggle to gain and maintain liberty shows us how realistic radical change is, and how a global construction boom is deepening and broadening the alienation of impoverished people around the world.

Laura T. Murphy is professor of human rights and contemporary slavery at the Helena Kennedy Centre for International Justice at Sheffield Hallam University in the UK. She is the author of The New Slave Narrative: The Battle over Representations of Contemporary Slavery, Survivors of Slavery: Modern-Day Slave Narratives and Metaphor and the Slave Trade in Western African Literature. Her work has been funded by the National Endowment for the Humanities, the British Academy, the National Humanities Center, and the Department of Justice. 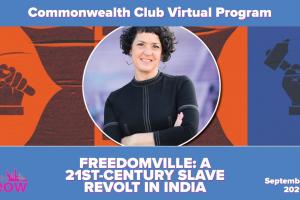