When Americans think about Mexico, many things may come to mind—complexities around immigration, perhaps, or travel involving beaches and food. Technology and innovation are probably not on that list, but increasingly a new reality is taking hold across Mexico: a growing technology and innovation sector with strong links to Silicon Valley and Bay Area investors, entrepreneurs and companies.

Mexico’s young venture capital industry is growing rapidly. From $55 million in 2010, annual investment has grown to more than $1 billion. Softbank’s $5 billion Innovation Fund, created several years ago to invest in Latin America, was a turning point that put Mexico on the global venture map. Now the country boasts unicorns and fast-growing startups. More are on the way, supported by universities, accelerators and by large tech and startup conferences in cities such as Guadalajara and Monterrey.

The roots of Mexico’s economic and cultural ties with the Bay Area run exceptionally deep, dating to Spain’s settlement of California during the 1700s. Linked by history, culture and family, the two economies have grown in parallel but on very different paths. A turning point came in 1994 with North American Free Trade Agreement (NAFTA), which stimulated a wave of investment in manufacturing by U.S. and California companies in Mexico. More recently, a small but rapidly growing technology and innovation revolution has been taking place south of the border.

Please join us to learn more about the growing ties between Silicon Valley and the Bay Area and Mexico's growing technology and innovation sectors.

This program is based on the new Bay Area Council Economic Institute report, "Southern Connection: Innovation Clusters in Mexico and the Bridge to Silicon Valley." You can read and download this report here.

This program builds on an event held by The Commonwealth Club's Marin Conversations series in 2018, in association with the Bay Area Council's Economic Institute and the Mexico Consulate in San Francisco. You can listen to that program here. 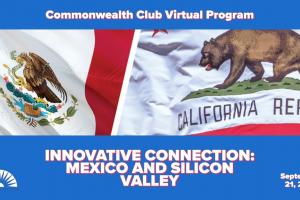