Peter Coyote has acted in more than 130 films (including E.T. the Extra-Terrestrial, Cross Creek, Jagged Edge,Patch Adams, Erin Brockovich, and Hemingway & Gellhorn), is an Emmy Award-winning narrator of more than 200 documentaries (including, for Ken Burns, The West, The National Parks, Prohibition, The Dust Bowl, The Roosevelts, The Vietnam War, The Mayo Clinic, and Country Music), and is a political activist, singer/songwriter and a Buddhist priest.

He has also penned two memoirs. He is the author of the new book of poetry, Tongue of a Crow, and a forthcoming December book, The Lone Ranger and Tonto Meet Buddha: Masks, Meditation, and Improvised Play to Induce Liberated States, in which he "reveals how to use masks, meditation, and improvisation to free yourself from overthinking, self-doubt, and fixed ideas of who you think you are."

Join a fascinating conversation with Peter Coyote about his amazing life, career, and the lessons he's learned along the way. 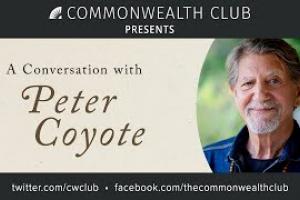