The 20th Anniversary of 9/11 and the Homeland Today: With Janet Napolitano, Anthony Romero and Amy Zegart

As the country reflects on the 20th anniversary of the 9/11 terrorist attacks, join us for a special 90-minute conversation focused on the state of homeland security today and looking ahead. Homeland security is a term that has evolved over the past two decades since the deadly terrorist attacks in New York, Washington and Pennsylvania. At first, it was a subject primarily focused on protecting the country from international terrorism, including Osama Bin Laden’s Al Qaeda, then ISIS, as well as affiliated terrorist organizations. Over the past several years and culminating on January 6 earlier this year, the phrase has also expanded to include domestic extremism and threats from within the United States.

A high-level panel featuring former Homeland Security Secretary Janet Napoliano, ACLU Executive Director Anthony Romero and Hoover Institution Senior Fellow and cybersecurity expert Dr. Amy Zegart will discuss a range of issues related to homeland security, including civil liberties and technology. The program will explore our changing understanding of homeland security, what we have learned about keeping the country safe over the past 20 years, and what the trade-offs have been for the country’s citizens and the country itself. 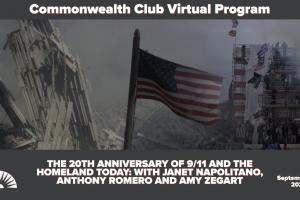