Mildred Harnack, born and raised in Milwaukee, was a Ph.D. candidate studying in Berlin in 1932 when the Nazis began their rise to power. Donner describes how her great-great-aunt Mildred began holding secret meetings in her apartment. Her small band of political activists grew into the largest underground resistance group in Berlin by 1940. Harnack recruited working-class Germans, helped Jews escape, plotted acts of sabotage, and collaborated on leaflets that denounced Adolf Hitler and called for revolution. At night her co-conspirators would slip those leaflets into mailboxes, public restrooms and phone booths.

When World War II began, Harnack became a spy, providing top-secret intelligence to the Allies. On the eve of her planned escape to Sweden, she was arrested by the Gestapo. A Nazi military court sentenced her to six years at a prison camp, but Hitler personally overruled that sentence and ordered her execution. On February 16, 1943, Mildred Harnack, the only known American member of the German resistance, was guillotined.

Donner draws on extensive archival research in Germany, Russia, England, and the United States, as well as on newly uncovered documents in her family's archive, to tell Harnack's story. She has woven those letters, diary entries, notes smuggled out of a Berlin prison, survivors’ testimony, and a trove of declassified intelligence documents into an epic story of moral courage.

This is an online-only program; please pre-register to receive a link to the live-stream program. We welcome donations made during the registration process to support the production of our online programming.

Copies of All the Frequent Troubles of Our Days are available for purchase at checkout (U.S. domestic shipping only).

Rebecca Donner
Author, All the Frequent Troubles of Our Days: The True Story of the American Woman at the Heart of the German Resistance to Hitler 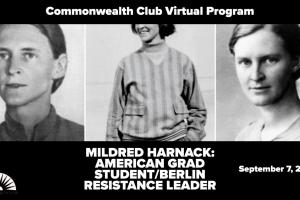