U.C. Berkeley Law Dean Erwin Chemerinsky is one of the country's most respected constitutional scholars. In his new book Presumed Guilty, he says that the U.S. Supreme Court has allowed the perpetuation of racist policing by presuming that suspects, especially people of color, are guilty before being charged.

Dean Chemerinsky argues that the fact that police are nine times more likely to kill Black men than other Americans is no accident but rather the result of an elaborate body of doctrines. He says the pro-defendant Warren Court was a only brief historical aberration and that this more liberal era ended with Nixon’s presidency and the ascendance of conservative justices, whose rulings have permitted stops and frisks, limited suits to reform police departments, and even abetted the use of chokeholds.

This is a free, online-only program; please pre-register to receive a link to the live-stream event. We welcome donations made during registration to support the production of our online programming.

Copies of Presumed Guilty are available for purchase at check out (domestic U.S. shipping only).

In conversation with Brian Watt 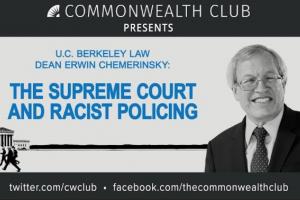