Historian and journalist Kai Bird's new book, The Outlier, is being acclaimed as a definitive account of President Jimmy Carter's presidency, including how President Carter’s often-controversial policies and initiatives appear in historical perspective.

Carter assisted Bird in his research, giving him exclusive access to the private papers of Charles Kirbo, Carter’s longtime personal lawyer and political adviser, as well as to the unpublished diaries of Carter White House aides Langdon Butler, Tim Kraft and Jerome Doolittle. Bird points out that as president, Jimmy Carter was not merely an outsider: he was an outlier. He was the only president in a century to grow up in the heart of the Deep South, and his born-again Christianity made him the most openly religious president in memory. Bird says this outlier brought to the White House a rare mix of humility, candor and unnerving self-confidence that neither Washington nor America was ready to embrace.

Bird traces the arc of Carter’s administration, from his aggressive domestic agenda to his controversial foreign policy record, taking readers inside the Oval Office and through Carter’s battles with both a political establishment and a Washington press corps that proved as adversarial as any foreign power. Mr. Bird shows how issues still hotly debated today—from national health care to growing inequality and racism to the Israeli-Palestinian conflict—burned at the heart of Carter’s America, and consumed a president who found a moral duty in solving them.

Bird won the Pulitzer Prize for biography for American Prometheus: The Triumph and Tragedy of J. Robert Oppenheimer. His work includes critical writings on the Vietnam War, Hiroshima, nuclear weapons, the Cold War, the Arab-Israeli conflict and the CIA.

Copies of The Outlier are available for purchase at checkout (shipping to U.S. domestic addresses only).

In Conversation with Dr. Gloria Duffy
President and CEO, The Commonwealth Club of California; Deputy Assistant Secretary of Defense under President Clinton 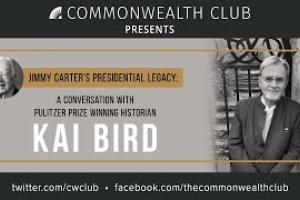