9/11 transformed American political and cultural life. Post-9/11 Americans were hyper-concerned with national security, public safety and the War on Terror. Now, looking back at the years of contention between the United States and terrorist organizations, journalists like Spencer Ackerman believe the military campaign set the stage for authoritarianism to rise in the United States. As a national security editor for The Guardian, Ackerman was part of the team that won the 2014 Pulitzer Prize for public service journalism for their reporting on Edward Snowden's surveillance revelations. Now, he’s looking to understand the endless conflict known as the War on Terror in his new book, Reign of Terror.

After 9/11, policies threatening the safety of Muslims and immigrants turned the War on Terror into a cultural and tribal struggle. It bolstered nativism and inspired bipartisanship. It paved the way for authoritarian leaders to rise to power and exploit sectors of political strength. By analyzing the decisions of Presidents Barack Obama and Donald Trump, Ackerman sets an argument for how the war became a broader and bitter culture struggle allowing demagogues to emerge.

Join us as Spencer Ackerman couples together journalism and history to transform how Americans understand national security policies and their detrimental impact on political life.

This is an online-only program; please pre-register to receive a link to the live-stream program. We welcome donations made during the registration process to support the production of our online programming.

Copies of Reign of Terror are available for purchase at check-out (domestic U.S. addresses only). 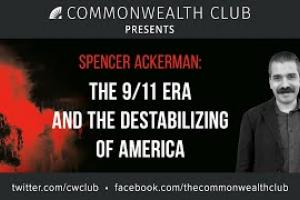