As we approach the 20th anniversary of 9/11, what is the lasting influence of Osama bin Laden? CNN national security analyst and New America Vice President for Global Studies Peter Bergen has been called the world's leading expert on bin Laden. In his new book, The Rise and Fall of Osama bin Laden, Bergen provides the first reevaluation of the man responsible for precipitating America’s long wars with al-Qaeda and its descendants, capturing bin Laden in all the dimensions of his life: as a family man, as a zealot, as a battlefield commander, as a terrorist leader, and as a fugitive.

Thanks to exclusive interviews with family members and associates, and documents unearthed only recently, Bergen’s portrait of bin Laden reveals for the first time who he really was and why he continues to inspire a new generation of jihadists.

Join a fascinating conversation about the man who set the course of American foreign policy for the 21st century and whose ideological heirs the U.S. continues to battle today.

Copies of The Rise and Fall of Osama bin Laden are available for purchase at checkout (U.S. domestic shipping only). 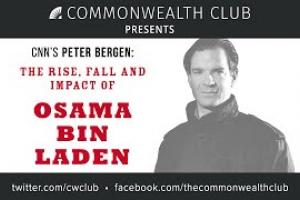