If there is one thing people have learned over the past 16 months, it is the importance and power of community. Join us for a special conversation with AAPI leaders and elders about anti-Asian racism, homophobia, transphobia, and their life-long activism and advocacy.

And come early before the program to enjoy a lunch courtesy of What the Cluck Thai Chicken and Rice.

Gil Mangaoang was born in San Francisco, California on March 22, 1947. He is the fourth of seven generations in his family to be born in the United States. Through more than four decades he has been active in the fight for social justice and equality in the United States and the Philippines. His memoirs also include his coming out story as a Filipino American gay man.

Jasmine Gee has volunteered at film festivals (International, Frameline), music venues (Davies Symphony, Herbst Theater), and street fairs (Folsom, Castro); has worked as an advocate and activist for LGBTQ organizations; served in leadership positions in on the GAPA AdvisoryBoard and the Trans March; is a musician (a clarinetist and a singer in 3 choral groups); contributing author of Transascestors, Volume 1; and is an elder, with Felicia Elizondo, Tamara Ching.

Crystal Jang loves being considered a QTAPI “Auntie.” Jang is a third generation San Franciscan and fourth generation Chinese American,. Having discovered she was attracted to girls at the age of 13, Jang has spend the last 6 decades dedicated to pushing the boundaries of API-queer visibility and activism. As a QTAPI elder, Crystal’s current focus is on fostering intergenerational relationships to sustain and strengthen the QTAPI community. She is a co-founder of OASIS (Older Sisters in Solidarity), APIQWTC (Asian Pacific Islander Queer Women & Trans Community, and the RED Envelope Giving Circle. Jang is happiest when she is causing “good trouble.”

Randy Kikukawa has been active in the LGBTQ+ community for more than 40 years and is currently music director of the GAPA (GLBTQ+ Asian Pacific Alliance) Men’s Chorus and managing director of the Golden Gate Men’s Chorus. Both choruses are members of the Gay & Lesbian Association of Choruses (GALA Choruses).

Kitty Tsui is a writer and an activist, a multi-hyphenate lesbian elder. Her groundbreaking book, Words of a Woman Who Breathes Fire, is the first book by a Chinese American lesbian. Her second, Breathless: Erotica, won the Firecracker Alternative Book Award. She has been included in more than 80 anthologies worldwide. Her work has been translated into German, Japanese and Italian. In 2018, her alma mater, San Francisco State University, inducted her into the Alumni Hall of Fame. The Smithsonian Asian Pacific American Center commissioned her as one of 12 API queer poets to be honored for a poem/video for the digital exhibition, “A Day in the Life of Queer Asian Pacific American.” She is the subject of Nice Chinese Don’t: Kitty Tsui, directed by award-winning filmmaker, Jennifer Abod.

This is a free program. We welcome donations made during registration to support the production of our online programming.

Lunch provided by What the Cluck Thai Chicken and Rice.

This program presented in partnership with Openhouse and GLBTQ+ Asian Pacific Alliance.

Writer; Activist; Author, Words of a Woman Who Breathes Fire 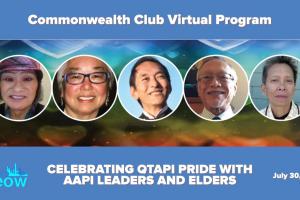