Sviatlana Tsikhanouskaya is the leader of Belarusian democratic forces, who numerous independent observers say beat the autocratic president Alexander Lukashenko in a presidential election on August 9, 2020. She stepped into the race after her husband was arrested for his presidential aspirations. Mr. Lukashenko has publicly dismissed her as a “housewife,” сlaiming that a woman can't become president.

After her forced exile, Ms. Tsikhanouskaya inspired unprecedented peaceful protests around Belarus, some of which numbered hundreds of thousands of people. She has visited more than 20 countries gathering support for a democratic Belarus and continues to advocate for the release of more than 500 political prisoners and peaceful changes through a free and fair election. In the past year, more than 35,000 people have been detained in Belarus, according to the United Nations. Tens of thousands of Belarusians have fled abroad.

Ms.Tsikhanouskaya has become a symbol of peaceful struggle for democracy and female leadership. On July 27, President Joe Biden met with Tsihanouskaya, and he issued a statement that "The United States stands with the people of Belarus in their quest for democracy and universal human rights." In 2020, Lithuanian President Nauseda and Norwegian MPs nominated her for the Nobel Peace Prize. She is included in Bloomberg's TOP-50 Most Influential People, Financial Times' Top 12 Most Influential Women, and Politico's Top 28 Most Influential Europeans.

In meetings with Chancellor Angela Merkel, President Emmanuel Macron, President Ursula von der Leyen, President Charles Michel, and other world leaders, she has emphasized the need for a braver response to the actions of the Belarusian dictatorship.This week, she has been in the United States, where she met with Secretary of State Tony Blinken as well as others in the U.S. government. Given the level of repressions against citizens and with Moscow supporting Lukashenko, Tsikhanouskaya is using the primary tool available to her in exile: Western support. She has sought more comprehensive sanctions on Belarus’s elites and businesses, to show them that it is “becoming more costly for them to support Lukashenko.”

Join a rare conversation with this outspoken advocate for democratic reforms and hear her thoughts on parallels between her struggles and challenges currently facing Americans.

Online-only tickets are free for all (members and nonmembers).

In-person tickets are free for members. Members: Click on the "Buy Tickets" button above to order your tickets, and select the members link on the left side of the page. Your username is the email you used to sign up as a member. You can also request a password reset if needed. Discount will automatically be applied at checkout. 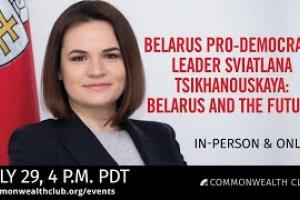